As a results of the MÉTA program, natural or semi-natural vegetation heritage of Hungary is estimated approximately not more than 1,800,000 hectar which is 19% of the country. From this area about 1,200,000 hectar has at least medium naturalness, what means 13% of the country.

Figure shows the distribution map of Pannonian closed sand steppes (Code: H5b). Beside the map we present the description of this habitat as a result of the MÉTA field data collection work. 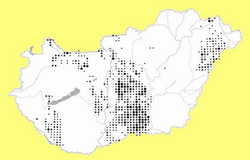 H5b – Closed sand steppes: Closed dry grasslands of humus rich soils developed on sand bedrock of the plains. Minimal cover of the herb layer is 50%. Dominant grass species are mainly Festuca wagneri, F. rupicola, Chrysopogon gryllus, Stipa capillata, Poa angustifolia, Bothriochloa ischaemum. It occurs on almost every sand region of the country; disappeared only from the smaller ones (e.g. Jászság, old dunes in the Tisza-völgy, except the Bodrogköz). The total area of the habitat is around 28,000 ha in Hungary. The calcareous sand regions of Dunai-Alföld holds 73% of the occurrences (20500 ha), in Kiskunság and on the sand region of Tengelic. The habitat occupies significant areas on the southern part of Nyírség (4000 ha). Concerning Kisalföld, it occurs mainly on the sands around Győr (altogether 1000 ha). There are numerous, but small and endangered stands in Somogy (950 ha) on acidic sand. Among its several occurrences at the edges of the Dunántúli-középhegység (1400 ha), it covers the largest area on the foothills of Vértes. On the other hand, it has small area in the Északi-középhegység (380 ha, mainly in the Gödöllői-dombvidék), and it is infrequent on Nyugat-Dunántúl (50 ha). A certain part of its stands, especially in Duna-Tisza köze, is highly uncharacteristic, since they developed from Molinia meadows (these stands belong partly to OC). The area of stands with natural origin and/or with at least medium species-richness is only a few thousand hectares.

Summeries like this were made for all of the 86 habitat types of Hungary (BÖLÖNI et al. 2008, MOLNÁR et al. 2008). Distribution maps and short decriptions of the habitats are available here.