Naturalness of our vegetation heritage 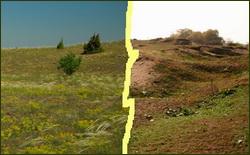 Human landuse of hundreds and thousands of years has had a significant effect on the natural vegetation of Hungary. Habitats were ruined, degraded or changed on considerable part of the landscape.
Till this time we had no quantified data from naturalness state of our vegetation heritage.

During the MÉTA program we first estimated the naturalness of every habitats in the country. The following system of naturalness-based habitat evaluation was used, which has proven to be efficient during the 15 years of its application (NÉMETH és SEREGÉLYES 1989, MOLNÁR és mtsai 2003, MOLNÁR et al. 2007):

For example a very old ancient woodland or a valuable steppe meadow has category (5), but a woodland invaded by Robinia pseudo-akacia has category (1).

This system fits with European traditions. Naturalness-value is an expert evaluation, which consider the structure of the habitat and the species composition together. Beside the flora, horizontal and vertical pattern of vegetation, patchiness, gaps, zonation, origin and age of the habitat, site-conditions, water-supply, water quality, erosion, humus content, its surrounding landscape and the landuse are under consideraton. Extremities of naturalness are indicated by the most valuable (most species-rich) and the most degraded sites of the habitat. This evaluation is rather subjective, so a detailed description was made for each habitat in a Habitat Guide (BÖLÖNI et al. 2003), where a characterization of naturalness are helped with some good examples. We define in the Habitat Guide what does a natural, a semi-natural or a degraded stand of the certain habitat look like. Naturalness-based habitat quality was recorded separately for each habitat type in every hexagon. Naturalness of different patches of the same habitat type in the same hexagon had to be merged into one (or two) value(s).

The most natural habitat types in Hungary are the habitats connected to water and to extreme site conditions:
euhydrophyte habitats (A23 - Euhydrophyte communities with Nymphaea, Nuphar, Utricularia and Stratiotes, A3a - Communities of slowly running waters with Potamogeton and Nymphoides),
marshes (B2 - Glyceria, Sparganium and Schoenoplectus beds, B3 - Water-fringing helophyte beds with Butomus, Eleocharis and Alisma, B6 - salt marshes),
halophytic habitats (F4 - Dense and tall Puccinellia swards, F5 - Annual salt pioneer swards of steppes and lakes, B6)
and all rocky forest types (LY1, LY2, LY3, LY4).

Table 1. Proportion of stands with high value of naturalness-based habitat quality (categories 4 and 5)

Considering the habitat groups, the euhydrophyte habitats, the few remained stands of fens and the halophytic habitats are the most natural ones among the treeless habitats. Mesic meadows and dry grasslands have the lowest habitat quality. The naturalness of wet meadows and tall herb communities is not much higher. Habitat quality of dry shrub habitats with natural origin is prominently high. Wet shrub habitats are also in a relatively good state. Secondary shrub habitats that develop after disturbance or abandonment have the lowest habitat quality. Among the forests, the rocky woodlands, the calcifrequent forests and beech woodlands are in the best state. Open and closed steppe oak woodlands, turkey oak-sessile oak and turkey oak-pedunculate oak woodlands are the furthest from their natural state.

Table 2. Naturalness-based habitat quality of the habitat groups according to the MÉTA database