Potential Natural Vegetation (PNV) – or, briefly, potential vegetation – is the vegetation that in the present abiotic environmental conditions can sustain itself permanently without any human intervention (Tüxen 1956). Hence, PNV is

Prehuman vegetation is a vegetation prior to man's landscaping activity, reflecting the environmental conditions at that time. Exceptionally, they may be consistent with current environmental conditions, but on most part of the Earth's surface, human landscaping activities have taken place for so long that environmental conditions have changed meanwhile. On the one hand, the climate changes over time without any human influence, and we know it has already changed. Climate change induces changes of soils and, in the long term, even of the hydrography. On the other hand, humans modify their environment in a direct way, which in particular changes the availability of water resources, but also indirectly affects the climate. Consequently, the former and present environmental conditions are typically different. But even if they were the same, prehuman vegetation characterizes the realized state, while the potential vegetation of that time could have encompassed a wider selection of vegetation types. As opposed to prehuman vegetation, models of potential vegetation can become a more appropriate source of information for nature conservation and restoration ecology, since restoring the habitats of the past is in many cases no longer a realistic restoration objective (Jackson and Hobbs 2009) as well as it does not ensure sustainability.

In earlier PNV estimations usually a single vegetation type was selected per location. Approaches ranged from inherently categorical methods (Fischer 1990, Aspinall and Veith 1993, Fischer et al. 2013), through rule-based methods (Hemsing and Bryn 2012) to a selection of vegetation types that received the highest probability at each location (Breziecki et al. 1993, Tichy 1999, Liu et al. 2009). At the same time, in reality, a number of different habitats can be potentially present (albeit not necessarily with the same probability). Hence, one place can have more PNVs - because the same environmental conditions may be suitable for several habitats. It can therefore be argued that mapping solely the most likely vegetation type results in a loss of information regarding the local vegetation potential. This is in accordance with

The concept of Multiple Potential Natural Vegetation (MPNV) was introduced by Somodi et al. (2012) to resolve this apparent contradiction. MPNV accounts for estimation uncertainty by assigning a probability value to each vegetation type rather than declaring the most likely PNV. Since MPNV estimates are complex, there are many different possibilities to display the results in map. For more information on the ecological interpretation and modeling possibilities of MPNV, please refer to our article on the scientific background of the estimates available at this site (Somodi et al. 2017).

The concepts related to the above one are as follow:

In Hungary, human landscaping has been going on for many years now, and for ahigh number of places there are no written sources available about the type of the past vegetation. Moreover, partly for human, partly for natural reasons, today's environmental conditions are no longer the same in the currently unvegetated or degraded areas as they were when the area was last covered by natural vegetation. Therefore, we have to rely on some estimation. The estimate may be based on an expert's experience accumulated during his life or on statistical estimations. An example of the former is the first such estimate for Hungary: Bálint Zólyomi's potential vegetation map (Zólyomi 1967). This is a map where the author has tried to reconstruct the vegetation that could cover the country before human influences. This is also a potential vegetation map but it is difficult to specify the timeline it applies to as environmental conditions taken into account by Zólyomi have partially been contemporary, partially reconstructed. Another example for expert estimation is the potential habitat data found in the MÉTA database, which reflects the field mapper's view under the current environmental conditions (Molnár et al. 2007). However, maps based on expert estimates can not be extrapolated in time or space, as opposed to estimates and models based on statistical contexts.
The basis of the published model is the statistical formalization of the relationships observed between the remaining natural habitats and their abiotic environment (for a more detailed description of the methodology please refer to Somodi et al. 2017 and Bede-Fazekas 2017). Habitat information was obtained from the MÉTA database. We selected natural habitats that represent the final stages of the natural development of the vegetation (succession). The abiotic environment is represented by different background variables. Most of them characterize climate, such as annual precipitation sum or mean summer temperature, but the background variables include a topographic feature as well. In addition, soil characteristics and the distance taken from different water bodies (lakes and rivers) were taken into account.

Training of the model

We built a separate model for each studied habitat, and environmental data from the 1977-2006 reference period were used to train the models. Building models is a step independent of prediction. Among the many possible modeling approaches, our choice has fallen on the Boosted Regression Trees method (BRT, Friedman et al. 2000, Friedman 2002, Schapire 2003). The use of BRT as a predictive ecological model is relatively new (De'ath 2007, Elith et al. 2008). However, several studies have pointed out their outstanding predictive power (Elith et al. 2006, Bühlmann and Hothorn 2007, Guisan et al. 2007a). It can be used well with high correlation among the predictor variables (Bühlmann and Hothorn 2007, Ogutu et al. 2011) if the correlation structure between the training and the prediction database does not differ significantly (Dormann et al. 2013). It is less sensitive to data errors (Graham et al. 2008) and the resolution of training data (Guisan et al. 2007b). 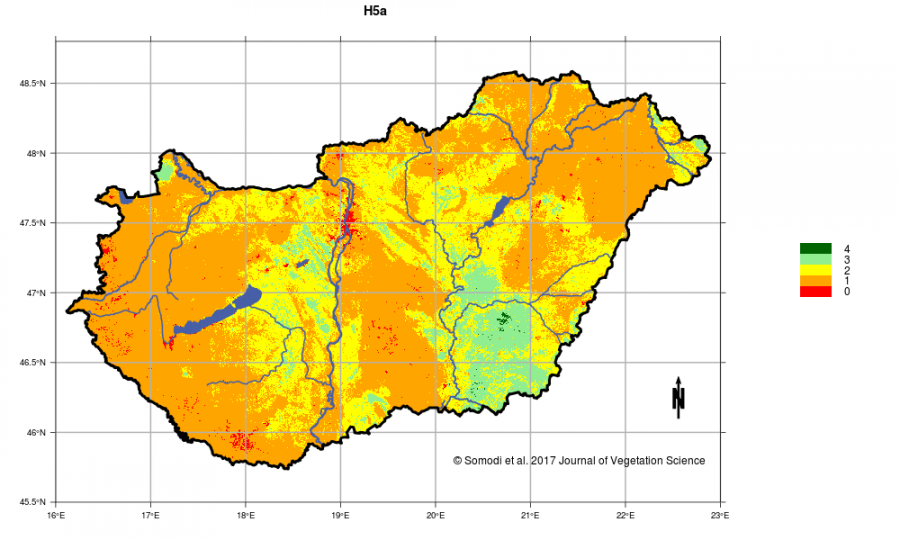 The main result of statistical modeling is the map series of the possible distribution of modeled habitats, which in turn provides Hungary's potential vegetation map. A map depicts how likely a given habitat occurs at a certain point in the country. Based on these, we can determine how larger a habitat's distribution could be, and where patches could be present if human activities had not taken place. This can support spatial planning in nature conservation and habitat restoration works by finding the most promising locations on the basis of the potential presence of the habitat. Potential distribution of specific habitats can be represented by probabilities between 0 and 1. These are able to characterize the potential distribution within the country in the most accurate way. If this raw probability value is somewhere twice higher than elsewhere, then the habitat is twice as suitable for the area. However, this not true for between-habitat comparison, because the absolute probabilities of each habitat depend on the habitat characteristics (biological and statistical, e.g. prevalence). Therefore, the probability values were converted to a five-level ordinal scale of 0 to 4 in a way to ensure comparability, where the highest value means the highest probability of occurrence. These ordinal values are displayed on the maps available on the website and are made accessible through the MÉTA database. (If appropriate, raw probabilities can be obtained through the authors.) 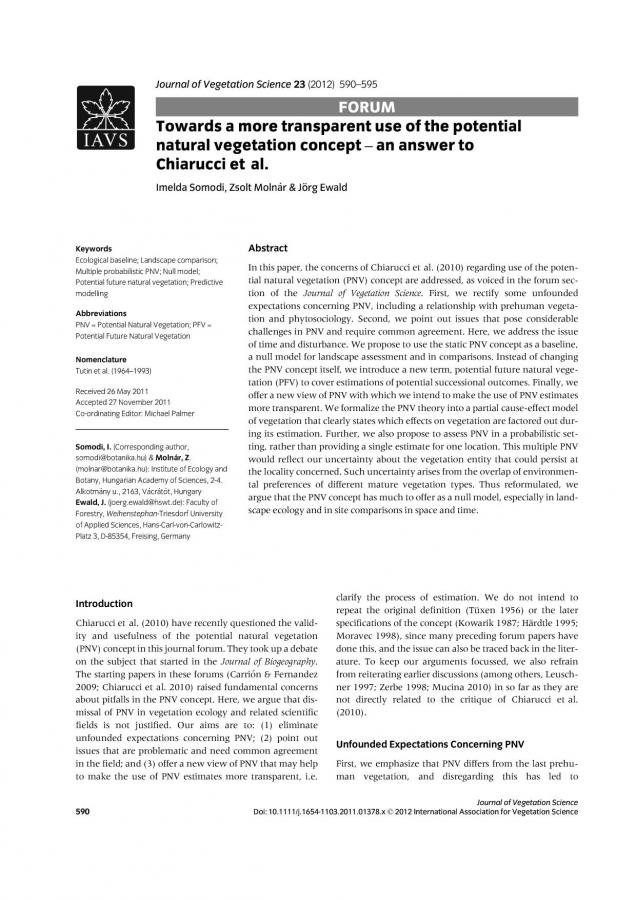 The above information is from the publications below. See details there: