The MÉTA survey has a new, grid-based, landscape-ecology-oriented, satellite-image supported method of field vegetation mapping. Its name „MÉTA” means GIS Database of the Hungarian Habitats (in Hungarian the „Magyarországi Élőhelyek Térképi Adatbázisa”). Our survey focused to describe the different type of natural and semi-natural habitats (grasslands, wetlands, woodlands and scrublands) of the country.

Figure 1 The fragmented remains of grasslands (yellow), scrublands (orange) and riverine woodlands (blue) are also in our focus.

The whole territory of Hungary (93,000 hectares) was surveyed between 2003 and 2006. Such a huge project has never been performed in botany in Hungary before. The field work was organised by regional coordinators: Bodonczi László (Nyugat-Dunántúl), Deák József Áron (Dél-Alföld), Fogarasi Péter (Kisalföld), Isépy István (Dunántúli-középhegység és Mezőföld), Kecskés Ferenc (Észak-Tiszamente), Ortmann-né Ajkai Adrienn (Dél-Dunántúl), Molnár Csaba (Északi-középhegység) and Rév Szilvia (Észak-Tiszántúl). Since the mapping was to be accomplished by the joint work of ca. 200 mappers, methodological guides for the standardization were prepared and field trainings were planned from the very beginning. Mappers contributed to this work including vegetation scientists, botanists, teachers, nature conservationists and students. We've spent more than 7,000 days on the field and we filled in more than 100.000 datasheets. We've used satellite images, topographic maps and forest management data as external sources to support the field surveys. 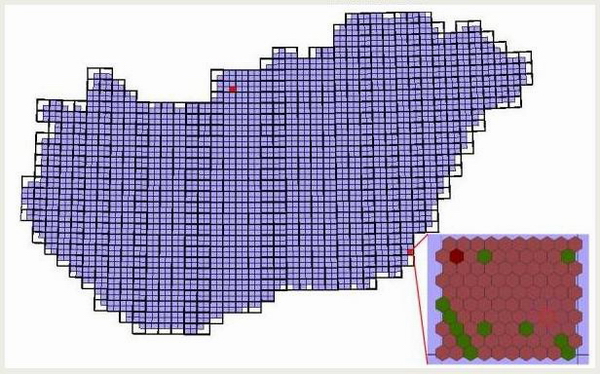 2. ábra The figure shows the 2 834 MÉTA quadrats covering the whole area of Hungary, and one quadrat closely with the 100 MÉTA hexagons in it. The hexagons are coloured by the categories of ecoregion. 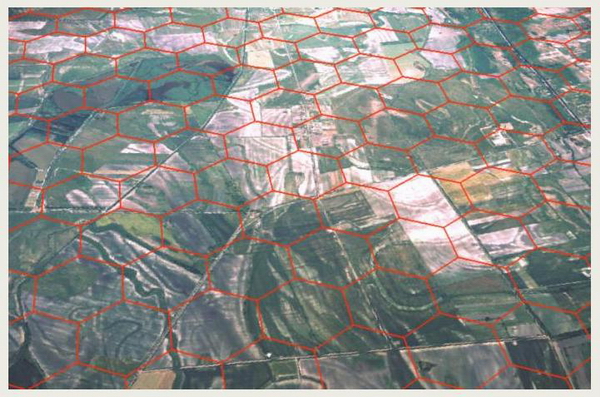 3. ábra Landscape along the river Tisza can be seen in the aerial photo. The red hexagons are the 35 hectar units of the MÉTA survey.

Units of the data collection

The survey was carried at three spacial level: the MÉTA quadrat (1), the MÉTA hexagon (2) and in the hexagons the habitat types (3). The data collection was helped by a detailed field guide, the ”AL-KÚ” Mapping Guide on the completion of the MÉTA datasheets (in hungarian).

(1) Grid of the mappation fits to the grid of Central European Flora Survey (KEF). One MÉTA quadrat is the quarter of KEF units, approximately 5,5 × 6,5 km (35 square kilometer). We call the quadrat level documentation as landscape level.

Collected attributes in each quadrat:
- subtypes of the habitat categories present in the quadrant
- the invasive alien species
- connectedness at landscape level
- regeneration potential

(2) We decided to use a hexagonal grid for the MÉTA mapping to overcome the problems of patch delineation. The grid was chosen from the different possible shapes (e.g. circle, triangle, quadrat, hexagon), because: (1) it covers the surface without overlappings and gaps; (2) is most similar to the circular panorama that is observed in the field; and (3) is more easily handled in landscape ecological analysis, because a hexagon has six neighbouring cells, all the same distance from the centre of the hexagon, while e.g. a square-shaped cell has four closer neighbours and four distant ones. One hundred hexagons form a quadrat – mainly for practical, organizational reasons, but also for collecting certain vegetation data at this spatial scale. 267,813 hexagons cover the whole country, and there are ca. 100 hexagons in a quadrant. There were “compulsory” and “non-compulsory” hexagons, the former containing more than 25% of (semi-)natural vegetation (in most cases satellite images and maps help decide whether a hexagon is compulsory or not). In the case of non-compulsory hexagons only the area of old fields and invasive species, and the potential vegetation have to be recorded. Data are recorded as codes, thus minimizing the amount of text within the database.

(3) As the main goal of the MÉTA program was to map the actual vegetation heritage of Hungary, we looked after remained patches of the ancient vegetation. That’s why for each compulsory hexagon the list of natural and semi-natural habitats was given during the field work. We prepaired a new habitat classification system (Á-NÉR 2003 Habitat Guide, in Hungarian), which is based on an earlier system, the General National Habitat Classification System (Á-NÉR). Á-NÉR 2003 is suitable for the landscape level habitat mapping. It has 86 habitat types, all with detailed and standardized descriptions in a Habitat Guide. For example, habitats are the beech woodlands, the open sand steppes or the reed beds. Photos are available for all of the habitats in the Photo Album („Fotótár” - in Hungarian) Within every habitat types some additional attributes were collected.

Collected attributes for every habitat types (in each hexagon):
- total extent of the habitat
- naturalness
- pattern
- neigbourhood
- connectedness
- isolation
- threats

For standardization of mapping, three different pre-printed data sheets and two different kinds of guides have been composed (Mapping Guide and Habitat Guide) and field trainings were organized. For standardization of estimation of naturalness-based habitat quality and regeneration potential field examples were prepared for each habitat type and each category of these attributes.

What kind of data was documented at the hexagon scale?

Habitat type: We record the Á-NÉR 2003 habitat types as lists for each hexagon. Stands larger than the determined minimal size (differing between the types, but usually some 10–100 m2) are to be recorded. Mapping includes all habitat types that belong to our natural vegetation heritage. We document the patches of the same habitat type in the hexagon as a compiled record. Patches of transitional state should be classified as two (or more) separate habitats. According to our experiences, the mean number of habitat types in a hexagon is 1.5–2 in the whole country, and 4–6 (not more than 8–12) in hexagons where the proportion of natural vegetation is high.

Old fields: In each hexagon the total area of old fields abandoned after World War II and at least two years ago, is recorded with the categories < 1, 1, 20, 100%. Military maps drawn 15–20 years ago are especially useful for recognizing old fields that can also be discerned in the field because of their typical vegetation pattern and species composition. About 10% of the territory of Hungary is covered by old fields, but no data were available about their exact distribution, actual vegetation, regeneration potential etc till this time.

Plant invasion: We have emphasized the importance of the invasive species among the threats, because in the coming decades they might cause the most serious damage to the natural and semi-natural vegetation in Hungary. We estimate the total area occupied by invasive species in each hexagon, based on the categories < 1, 1, 20, 100%.

Land use: As a result of decreasing numbers of domestic animals, the use of grasslands is declining all over the country, which leads to successional changes. There are no exact data on the process, because on the country scale, statistics are given only for the gross number of animals per settlement or per farmer, while there is no information on the way of keeping (e.g. stalling or grazing) or feeding (e.g. hay or other forage). Therefore we also document pasturing or mowing of the grasslands at the hexagon level: mowing, pasturing with cattle, sheep, or with other domestic animals (e.g. goats, geese, horses). More than one category can be marked if appropriate. Data on pasturing or grazing are obtained by observation: either the site has just been pastured or mowed at the time of the mapping or the mapper makes a decision based on the presence of excrements (pasturing) or the lack of dry stalks from the previous year (mowing). If evidence of threats, invasive species, old fields and land use is lacking in the field, the code “not observed” should be marked. Thus we can avoid the misinterpretation due to mere lack of data.

What kind of data was documented for a habitat type in a hexagon?

Area, extent: Size of each occuring habitat was given as percent of area of the hexagon. The areal cover of each recorded habitat type has to be given as a proportion of the hexagon using the categories < 1, 1, 10, 50, 100%. Satellite images help make the estimation.

Naturalness: To prepare the natural vegetation heritage inventory for Hungary, we had to evaluate the habitat quality of each vegetation type in the hexagon. The following system of naturalness-based habitat evaluation (Németh – Seregélyes 1989) was used, which has proven to be efficient during the 15 years of its application: (1) totally degraded state; (2) heavily degraded state; (3) moderately degraded state; (4) semi-natural state; (5) natural state. For example an arable field or a settlement has category (1), and a very old ancient woodland or a valuable steppemeadow has category (5). Naturalness-based habitat quality was recorded separately for each habitat type. The naturalness-based habitat quality of different patches of the same habitat type in the same hexagon had to be merged into one (or two) value(s). To estimate the naturalness we considered the species composition, the flora, the structure of the habitat (horizontal and vertical pattern of vegetation, patchiness, gaps, zonation, etc.), origin and age of the habitat, site-conditions (water-supply, water quality, erosion, humus content, etc.), its surrounding landscape and the landuse (landscape context). Selection of the proper category of naturalness-based habitat quality is supported by a large set of examples in the Habitat Guide.

Neighbourhood: Prediction of future changes of vegetation patches can be supported by the evaluation of the direct effect of neighbourhood (< 200 m). This evaluation means deciding whether the neighbouring patches will aid or hinder the survival of the particular habitat patch in the next few (10–15) years. The categories are: (1) definitely positive (sustaining neighbourhood), (2) slightly positive, (3) indifferent, (4) slightly negative, (5) definitely negative (destructive neighbourhood). The neighbourhood is negative, e.g., if there is an intensively used arable field (chemicals, infiltration of fertilizer), expanding settlement, or spreading populations of invasive species surrounding the patch. Also an alder woodland around a patch of Molinia meadow may accelerate the colonization of trees thus causing the disappearance of the meadow. Neighbourhood is positive, if it serves as a source of species (a forest rich in species around a well-established bush vegetation), provides proper micro-climate (e.g. woodland around a bog), buffers against degrading factors (forest strip between a grassland and an arable field). Selection of the proper category is supported by a set of examples in the Mapping Guide. 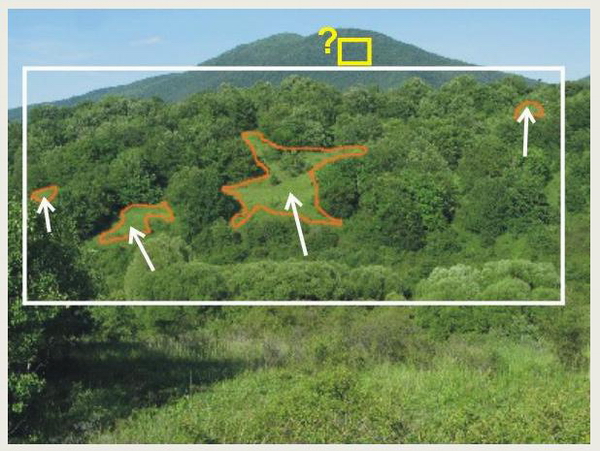 Fig. 4. Pattern of the grass is the orange coloured polygons, the Neighbourhood is the white square, and the yellow square shows the Connectedness in the surrounding landscape: Are there any similar grassland on the next hillside?

Threats: In many cases, human disturbances threaten the survival of the remnant vegetation patches. From 22 threat types the most characteristic ones had to be selected that actually threaten the survival and maintenance of the habitat type in the hexagon in the next 10–15 years. The strength of the threats is not recorded.

Some of the threatening factors (listed on the data sheet) are as follows:

What kind of data was documented at the quadrat scale?

Subtypes of habitats: We collected the subtypes of the habitat categories present in the quadrant to enlarge our vegetation geographical and vegetation dynamical knowledge.

Connectedness at landscape level: Connectedness is also documented at the quadrat level. We examined the area between the stands of the particular habitat type for two different aspects: whether the species pool of the habitat type exists there and whether there is any possibility for dispersal through this area (motorways or tree lines hindering dispersal). Categories indicate that stands are properly connected, moderately connected or isolated. For example, in marshes it is evaluated whether the marsh patches are connected by brooks or channels, or in steppes whether there are steppe species in the forests, mesic grasslands or hedges between the steppe patches. Selection of the proper category is supported by a set of examples in the Mapping Guide.

Fig. 5. Two parts from the MÉTA database. The habitat types and their areal proportion in the hexagon are shown in the charts. The radius of the circle corresponds to the total area of (semi-)natural vegetation in the hexagon, the proportions of the different habitat types are shown as well. In the empty hexagons we did not find any considerable habitat type. Figure on the left shows a landscape under strong anthropogenic effects. The right side shows landscape of a hilly region with oak and beech woodlands.